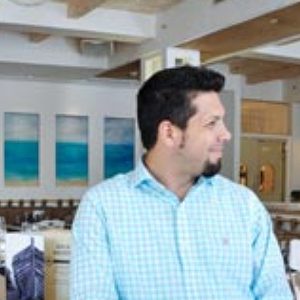 While studying fashion design in Montreal, Reno earned a living at Estiatorio Milos, a restaurant known for its Mediterranean Cuisine. His natural affinity for hard work took him from busser to server, from manager to maître d’ and ultimately to General Manager. He knew he had found his calling.

His commitment to further himself took Reno to New York City where he was part of the opening team of Estiatorio Milos in 1997; where he remained an integral part of the management team for years before making the move to Long Island.

In Roslyn, Reno became the Managing Partner of Limani developing an authentic Grecian concept on the Long Island dining scene.

In May 2013, Reno opened his latest venture, Kyma with partners Yiannis Chatiris, Mike Angeliades and Christos Panayiotopoulos. Kyma embodies a Greek Island ambience not to be missed.